Vocation for Justice: Listen for a Change

The Spring 2022 issue of the Columban Social Justice newsletter ‘Vocation for Justice’ is now available. It takes the general theme 'Listen for a Change' from a key theme of the campaigning around the United Nations COP26 climate conference in Glasgow last November.

Vocation for Justice: Listen for a Change
PDF (6.33 Mb)

The cover of the newsletter shows the Columban team at the ‘Global Day of Action’ in Glasgow. Columban JPIC in Britain marched alongside the COP26 Coalition, the Laudato Si’ Movement, Jesuit Missions and many others to call for world leaders to tackle multiple crises of inequality, climate instability and the COVID19 pandemic. They were in a faith bloc among around 125,000 people, undeterred by wind and rain, and blessed with the occasional rainbow. Those present found it a life-affirming experience of listening to multiple voices, including indigenous people, communities facing extreme weather, and young people.

Columban Justice and Peace Worker James Trewby has interviewed two young women who helped put on the ’24 hours for the climate’ vigil in Glasgow. “We all have a role to play, and COP26 was just the beginning of our journey!” says one of them.

This issue takes the theme, ‘Listen for a Change’, highlighting the importance of listening to prophetic voices and to recognise changes happening to build a sustainable future. The Centrespread raises voices from COP26, both in the conference and in the exciting rallies and meetings around it. In an international show of solidarity,100 demonstrations in the UK, including in London and Cardiff, were joined by events in another hundred countries across the world. Columbans will be part of the lobby to ensure that the call for climate justice cannot be ignored over the coming months as the world builds up to November’s COP27 in Egypt.

Salesian Fr. Martin Poulsom writes on ‘Critical Optimism and COP26’. Andy Whitmore of the London Mining Network, of which Columbans are members, writes about a ‘Just Transition’, calling for a re-consideration of concepts of economic growth and consumption, and promoting a ‘circular economy’ where resources are re-used, but also a reduction in consumption in general. Such principles, if put into practice, would require major shifts in personal, government and business prioritisation. However, they would also form the basis of a true ‘Just Transition’.

Listen to the full 'Jubilee for the Earth' podcast

In his editorial, Fr. Peter Hughes, reminds of another important UN conference coming up, which Columban JPIC internationally is engaging with. The UN Convention on Biological Diversity (COP15) will take place in China 25th April – 8th May 2022. Last year, Columbans produced a ‘Jubilee for the Earth,’ on biodiversity and now there are six new episodes. Biodiversity loss is another long-term systemic problem, so serious that Columban eco-theologian Sean McDonagh, has called for a Requiem to honour creatures facing extinction. He says, “the liturgy would encourage people of faith to take the destruction of biodiversity much more seriously.” 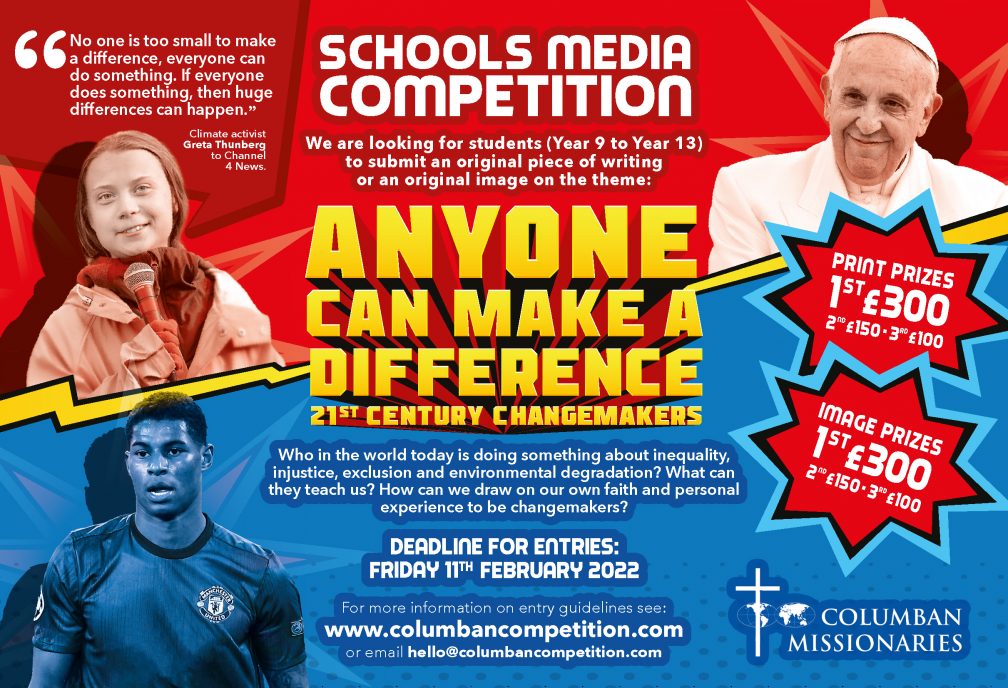 Readers are also reminded that written and image entries for this year’s Columban Schools Competition, ‘Anyone can make a difference: 21st Century Changemakers’, must be in by 11th February. Young people 13-18 years are asked to consider: Who in the world today is doing something about inequality, injustice, exclusion and environmental degradation? What can they teach us? How can we draw on our own faith and personal experience?

Vocation for Justice is a 12-page magazine sent out three times a year since 1986 to around 7,000 readers.

To subscribe and to receive the latest copy of the Vocation for Justice magazine, please call the Mission Office on 01564 772 096 or email to v4j@columbans.co.uk.

Find previous issues of Vocation for Justice on our website.