Founded in 1918 as a mission to China, Columban missionaries today live and work in many countries around the world. 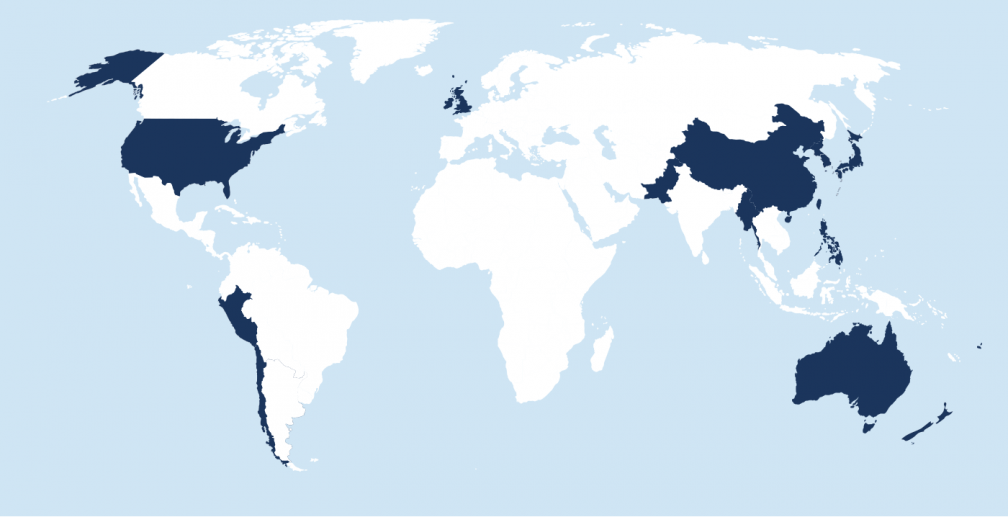 As part of the missionary outreach of the Catholic Church, we bring the lived experience of mission in other countries where we work to the Australian Church and the wider community. We share what we have learned from living and working across the boundaries of culture, language and faith, especially among the poor, marginalised and exploited. Our empathy is for those living at the edges of our society, for the indigenous, migrants, refugees and minority communities.

Read the latest updates from the Columbans in Australia

Columban mission in Chile began in the 1950s and was carried out during a time of dire poverty, resulting from lack of employment and education, and within a volatile political period that often caused violent social unrest. The violent political and economic turmoil brought many hardships and much suffering for the people of Chile. Much poverty still exists today although the political climate is now much more stable.

Read the latest updates from Columbans in Chile

The Columban presence in China includes ministries to people in Hong Kong and mainland China. These ministries form part of the Universal Church’s expression of hope for all the people of China, the largest population of any nation in the history of humanity.

The worldwide leadership of the Missionary Society of St. Columban is based in Hong Kong after the Superior General and his Council transferred the Society’s headquarters from its traditional home in Ireland to China on 1st May, 2008 to be closer to where many of our missionaries are working.

The General Council is responsible for the governance of the Society and for facilitating and guiding its mission. It is made up of the Society Leader, the Vicar General and two Councillors.

Read the latest updates from Columbans in China

Columbans in Fiji work in the parishes of Ba, Raiwaqa and Labasa. We promote mission in the local church and work for Justice, Peace and the Integrity of Creation with the diocese and local civic society groups. We work with the Archdiocesan Office and have assisted in translating the Bible and liturgical texts into Fijian (Vosa). We minister in nearby hospitals and are involved with outreach to the Korean and Rabi-Kiribati linguistic groups. Besides this our ministry also includes supporting the Formation Programmes for Priesthood and Lay Mission.

Read the latest updates from Columbans in Fiji

Columbans in Ireland is a collaborative effort between the Columban Fathers, Columban Sisters and Lay Missionaries who through a variety of ministries respond to God’s mission. Much of Columban work in Ireland is focussed on responding to the needs of new multicultural Ireland. They work to establish good relationships with other faith communities, supporting refugee and migrant communities.

Besides this, Columbans in Ireland are involved with mission awareness and fundraising in parishes and inviting readership to the Irish ‘Far East’ Magazine. They promote justice, peace and environmental justice and support the Migrant Rights Centre, a project which was initiated by the Columbans in response to the dramatic increase in migration into Ireland from the late 1990s onwards. Columbans in Ireland support the Immigration Apostolate and are members of the Irish Missionary Union. In addition to this they lead adult catechesis programmes and are actively involved in seminary formation and retreat work.

Our mission in Japan takes place in parishes, through dialogue with people from other religions, culture and language and through caring for our environment. Presently, there are 18 Columban Missionaries in the Region of Japan, 16 are priests and 2 are lay missionaries. These missionaries come from seven different countries including Australia, Ireland, Korea, New Zealand, Philippines, United States and Vietnam.

Read the latest updates from Columbans in Japan

Columbans in Korea (South) are a group of Columban Fathers, Sisters and Lay Missionaries who give expression to their commitment to the mission of Christ through a variety of ministry work Besides promoting justice, peace and environmental justice the Columbans engage in Cross-Cultural and Interreligious Dialogue between peoples of different cultures, language and religions. We run educational rehabilitation and social integration programmes for people with learning difficulties and the intellectually impaired. We are pleased to provide quality care for the retired and aged, hospice patients and people living with HIV/AIDS and assist with the region’s alcoholism.

Read the latest updates from Columbans in Korea

Through a variety of ministries Columbans in Myanmar focus on the promotion of dialogue between peoples of different ethnic and religious groups including Buddhists, Hindus, Muslims and Christians – the relevance and necessity of which is becoming ever more apparent in today’s world. Through the generous support of Columban benefactors, Columban Missionaries have been able to build schools for thousands of internally displaced young Kachins, as well as help train teachers and school-boarding masters. We are actively involved in various development projects that support local communities and preserve Kachin way of life. Columban Sisters help facilitate a women’s centre which offers counselling and other services for women, including a traditional weaving centre. They also facilitate a home care health program for people living with HIV/AIDS at the Hope Centre, a drug rehabilitation program for youth, and a respite house to enable rural communities living afar from population centres to avail medical care.

Read the latest updates from Columbans in Myanmar

Columbans in New Zealand work to keep the vital aspects of ‘mission’ on the agenda of the home church and help to promote a true ‘mission’ spirit, whilst encouraging hope-filled responses.

Columban Missionaries aim to grow vibrant Catholic-Christian communities where they work, restoring dignity to the poor and marginalised, whilst enabling them to challenge the roots of poverty and social injustices that are impacting their lives. To date, 50 New Zealand Columban Missionaries have served in overseas missions.

Columban Missionaries in Pakistan work in three parishes in two separate dioceses, Lahore, in Punjab province to the north-east, and Hyderabad, down south in Sindh.

The ministry work of Justice, Peace & Integrity of Creation has always been a priority of Columbans in Pakistan. As well as being actively involved in human rights and justice issues at a grass roots level, Columban Missionaries have been at the forefront of raising awareness on urgent national and international concerns. In the 1990s, this involved the Debt Campaign and the impact of globalisation on the poor. Today, we continue to take the initiative in raising awareness, through our Columban publications and workshops on Climate Change, which is already having a major impact on Pakistan, especially with concerns of water supply. JPIC issues also provide the opportunity for Interfaith Dialogue, as they concern all people.

Formation and the empowerment of lay people is a priority at a parish level in Pakistan, especially of young people. Columbans and Lay Missionaries have also been journeying closely with women in Pakistan, listening to their stories, encouraging and supporting their active participation in community life and activities.

Read the latest updates from Columbans in Pakistan

Since 1951 Columbans in Peru have been working in parishes and serving the poor in places where the dignity of life is not respected. Our main focus is to promote and empower lay leadership in the Church and Peruvian society. Christ is our model, and by our efforts to live and promote gospel values, we channel His fullness of life to all.

Read the latest updates from Columbans in Peru

Visit the website for the Columban Region of Peru

Columbans in the Philippines have found a myriad of ways to live out their call to mission. We lead others on a ‘deep journey into Laudato Si’ to inspire urgent action for the care of God’s creation. This resonates among the indigenous tribal communities of Mindanao, where we also help to facilitate inter-religious dialogue between Christians and Muslims.

Read the latest updates from Columbans in the Philippines

Among those working in the Taiwan Mission Unit are ordained Columbans, Lay Missionaries and Seminarians. Our current mission priorities are ministering among migrant workers, immigrants and their families and victims of human trafficking. We work with indigenous peoples in the Taian Paris located in the Hsinchu Diocese besides support disadvantaged infants, children and youth and those living with and affected by HIV/AIDS. The majority of our ministry is based in three Migrant Centres of the Hsinchu Diocese.

Read the latest updates from Columbans in Taiwan

In the U.S., we continue to invite all the baptized to share in the universal mission of the Church through actively supporting our various missionary endeavors or through exploring the missionary dimensions of their own faith with us in a cross cultural setting. We work with Korean, Hispanic, Filipino and Chinese communities in Washington, D.C., Bristol, Rhode Island, Omaha, Nebraska, El Paso, Texas (and across the border in Juarez, Mexico) and California. Our Columban Center for Advocacy and Outreach in Washington, D.C., focuses on the issues of justice, peace and integrity of creation, raising awareness among lawmakers and providing young people with an opportunity to advocate on behalf of the voiceless.

Read the latest updates from Columbans in the US

Columban Centre for Advocacy and Outreach

The Columban Centre for Advocacy and Outreach was founded in 1985 as the national advocacy office for the Missionary Society of St. Columban in the United States.

We serve as the line of communication between Columban missionaries on the ground and policy makers in Washington, D.C.​ Our mission is to work towards a more just, peaceful, and environmentally sustainable world by engaging in the political process guided by our faith and the Gospel.​ We work for structural change for the poor and marginalized populations Columbans serve around the world. We advocate for policies and structures that bring society and the world into right relationships with all of God’s Creation. We use Catholic Social Teaching as our lens to engage in legislative advocacy and community engagement.

Visit the Columban Centre for Advocacy and Outreach 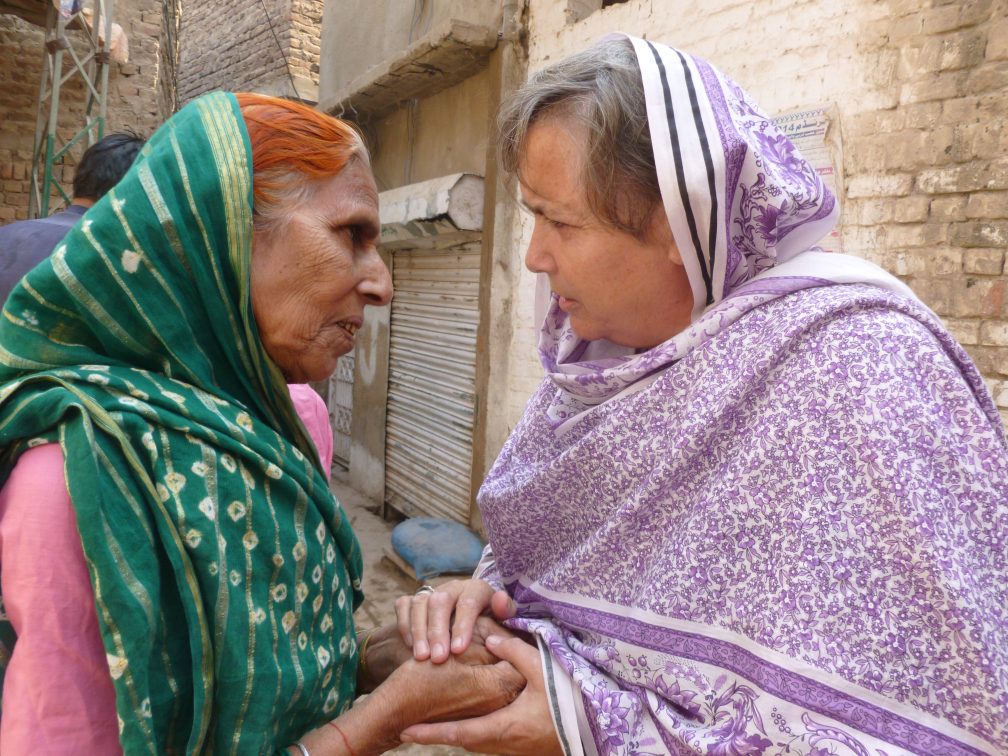 Founded by Bishop Edward Galvin in 1925, the Missionary Sisters of St. Columban are religious women who commit themselves to be witnesses of God’s love and compassion. They have a strong affiliation to the Columban Missionaries and are present today in many of the same countries. Please visit www.columbansisters.org for more information.

“And he said to them, "Go into all the world and proclaim the gospel to the whole creation.”