The Columbans in Britain are rising to the moment and donning walking boots to join the Young Christian Climate Network (YCCN) on their 1,000 mile relay to the 26th UN Climate Change Conference of the Parties in Glasgow later this year.

Find our more details about the YCCN relay to COP26

Columban Justice and Peace Education Worker James Trewby, along with Fr. John Boles and accompanied by a number of Columban lay missionaries and co-workers will join the relay as it undertakes part of the Route Section 9 between Oxford and Birmingham next month.

This November, world leaders, climate experts and negotiators will come together in Glasgow to discuss climate change and agree coordinated action to tackle the climate crisis. The Young Christian Climate Network believes it is a ‘decade-defining opportunity to make a stand’ and have organised a relay which began at the G7 in Cornwall on 11th June and will end in Glasgow on 31st October in time for the talks which begin on November 1st. ‘Convinced of the Biblical mandate to care for creation, and lament its exploitation’ the YCCN wish ‘to see systematic change on a global and a local scale’ and hope that the relay will engage Christians in ‘creation care theology, individually and corporately.’ 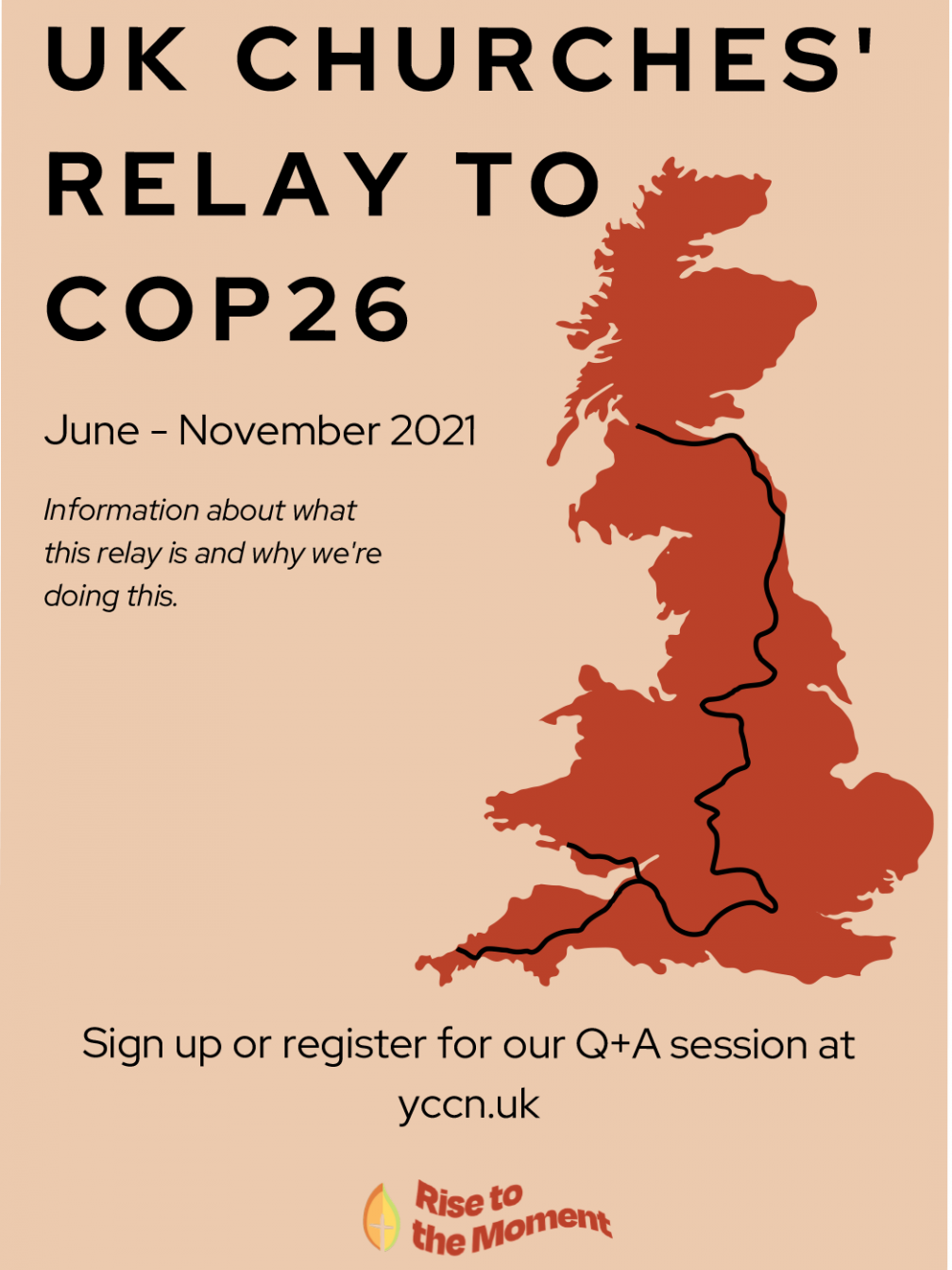 Passionate about campaigning for justice, peace and the integrity of God’s creation, James and Fr. John Boles will represent the Columbans by joining the YCCN on their walk from Deddington, to Banbury on Wednesday 18th August along with Lay Missionaries Jung-Hae Kim Roberta, Teresa Chuah Hui-Ling and Communications Officer Emma Darling. Columbans stand in solidarity with the vulnerable and the voiceless. Fair climate finance and justice for our brothers and sisters in climate-vulnerable countries around the world is what’s driving the Columbans to unite with YCCN in asking our world leaders to make decisions which ‘protect people not bank balances.’

Communications Officer Emma Darling, who will be responsible for sharing the Columbans participation of the relay explains, “I’m looking forward to joining the #RiseToTheMoment relay as it passes through Oxfordshire next month. The young people taking part really are an inspiration! Their commitment to raising awareness about the injustices caused by climate change is amazing! Columbans work in many communities around the world affected by climate change. It’s important we join forces and call for justice to protect our neighbours, our planet and generations to come.”

Fr. John Boles who has recently returned to Britain having been assigned in Peru has witnessed the catastrophic effects of climate change across the country. Farmers in the Andes and the Pacific coast depend on a regular pattern of rainfall. However, in recent years unseasonal heavy downpours linked to alterations in global weather have provoked disastrous flash-floods which destroy homes and infrastructure, wash away fertile topsoil and silt up rivers and coastal lagoons downstream (thus ruining fisheries and making watercourses yet more prone to flooding.

The YCNN is calling upon the UK Government to reinstate the foreign aid budget to pre-COVID levels and secure agreement from rich countries to double the commitment of $100bn a year for climate finance. Besides this they want collaboration with other governments and international organisations to develop a new regulated climate loss and damage mechanism which not only saves lives but livelihoods. Finally they wish to push for the debts of the world’s poorest countries to be cancelled so they can better confront the climate crisis and other urgent priorities.

Motivated by their Christian faith, the YCCN have three key ambitions for this relay; that it will be accessible, full of conviction, and celebratory. They are inviting people to get involved and have identified to a number of ways in which people can support them. For more information please visit their website https://www.yccn.uk/rise-to-the-moment

The Young Christian Climate Network is an action-focused community of young Christians in the UK aged 18-30, choosing to follow Jesus in the pursuit of climate justice.