This is a jubilee year for a number of our Columban martyrs. Fr Cyril Lovett writes about these anniversaries and a new booklet on the 24 Columban missionaries who died violently on mission. 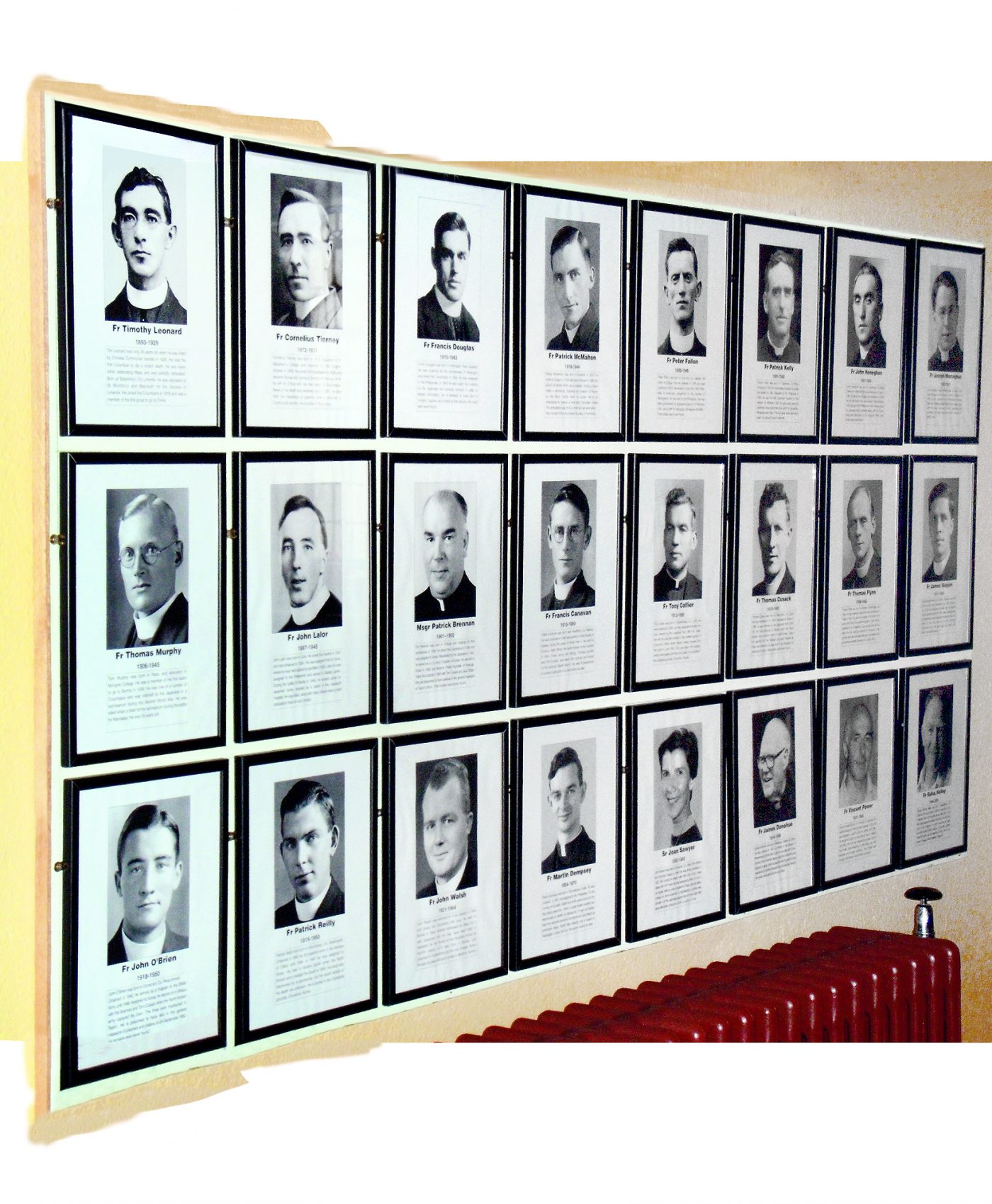 On the back wall of our college chapel here at St Columban’s, Navan, there are twenty-four framed black-and-white photographs. They represent the twenty-three Columban priests and one Columban Sister who died violent deaths while living out their missionary commitment in foreign lands. We refer to them as our Columban Martyrs.

The memory of this group lives on among us. They are our best, those who generously gave everything to the cause. They are a constant stimulus, a reminder to us of the words of the hymn “Go in my name and because you believe, others will know that I live”.

This year is a jubilee year; seventy-five years ago, Frs Patrick Kelly, John Henaghan, Peter Fallon, Joe Monaghan and John Lalor, known collectively as ‘The Malate Martyrs’ were slain in 1945 in the Philippines. This year is also the seventieth jubilee year of a group of seven Columbans who died in 1950, in the Korean War: Frs Tony Collier, Jim Maginn, Paddy J. Reilly, Tom Cusack, John O’Brien, Frank Canavan and Monsignor Pat Brennan.

Some of them were older: John Heneghan was sixty-four, but the majority were in their mid-thirties, early forties. Some had already many years of ministry in the country in which they died, others, delayed by World War II, had barely arrived, and were still striving to become fluent in the local language. In recent years we have dedicated a page of the Far East to each one’s story. Now we have published them all together in a booklet entitled Columban Martyrs 1921-2001, which you can purchase for a fee of £10 including postage and packaging.

In the Foreword to the booklet, Fr Tim Mulroy, our Society Leader, makes many interesting points. He writes, “As missionaries, all of them experienced their own vulnerability and limitations as they learned a new language and adapted to a different way of life in another country.”

“However such fragility would have served to remind them that the mysterious power of the Gospel message came not from themselves, but rather from God. Through their missionary way of life, then, they were gradually prepared to see that God’s power is made perfect in human weakness, that God’s providence becomes more visible in moments of human failure, and that God’s light shines through the darkness of deafeat by this world”.

Becoming a missionary in a very different culture is indeed a daunting task. It takes a lifetime to be fully at ease in a new language and culture, so that if God chooses to accomplish something through us we experience something of what St Paul felt when he wrote, “We have only earthenware jars to hold this treasure, and this proves that such transcendent power does not come from us; it is God’s alone“ (2 Cor. 4:7). So, these Columban Martyrs would in no way have regarded themselves as ‘heroes’. They would probably have said, “We were sent to live and to share with these people; we could not desert them in their hour of need”.

Fr Tim, in his Foreword, has another important challenge for us. He writes, “The stories of Columban martyrs in these pages… serve as an invitation to ponder the depths of our own faith. As our world becomes a global village, we are offered numerous opportunities to encounter people from other cultures and other faiths. Do we see these encounters as opportunities to build bridges, to form new friendships, and to embrace the wonder and diversity of God’s world? As missionary disciples of Christ, do we see ourselves as messengers of God’s unconditional love and mercy to all those who cross our paths in everyday life? Do we believe that our inadequacies and our failures are invitations to develop a greater trust in God’s providence and generosity?” 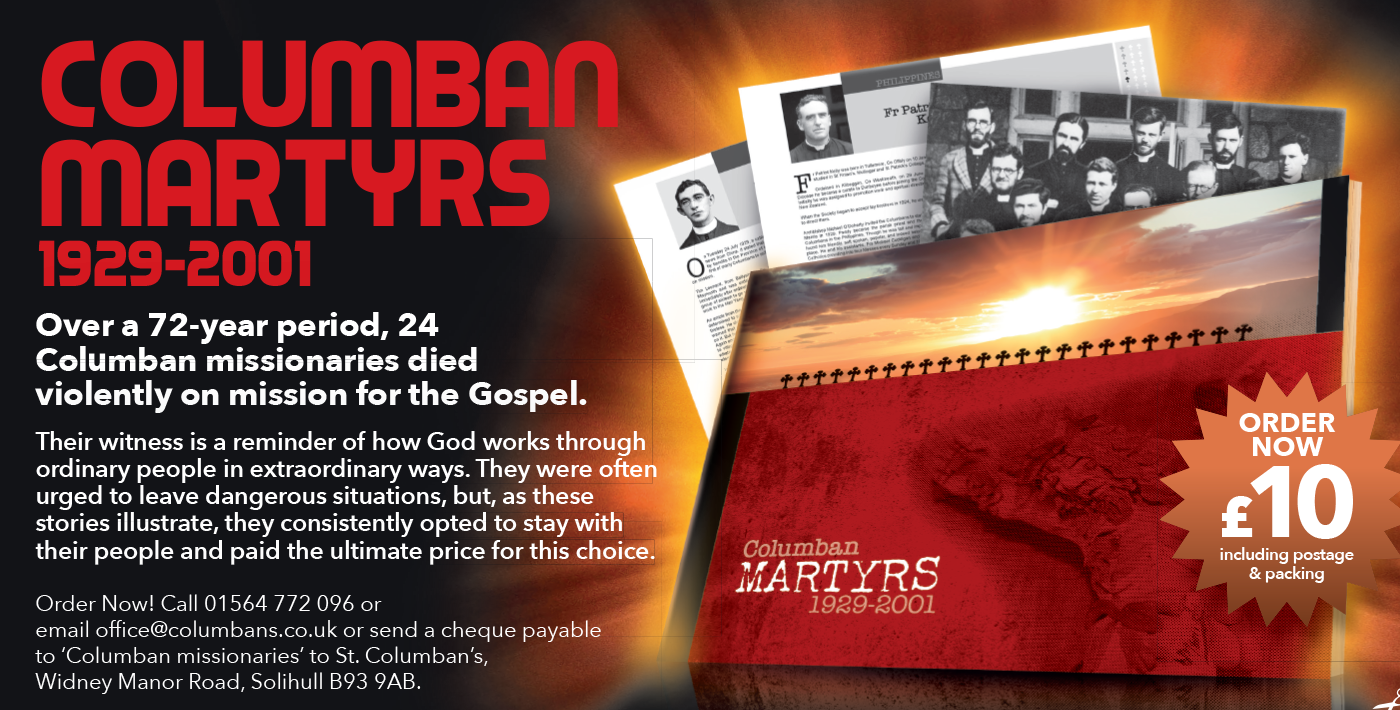 Purchase your own copy of the Columban Martyrs 1929 - 2001, a collection of concise biographies of these 24 Columban missionaries who lived and died for the Gospel.