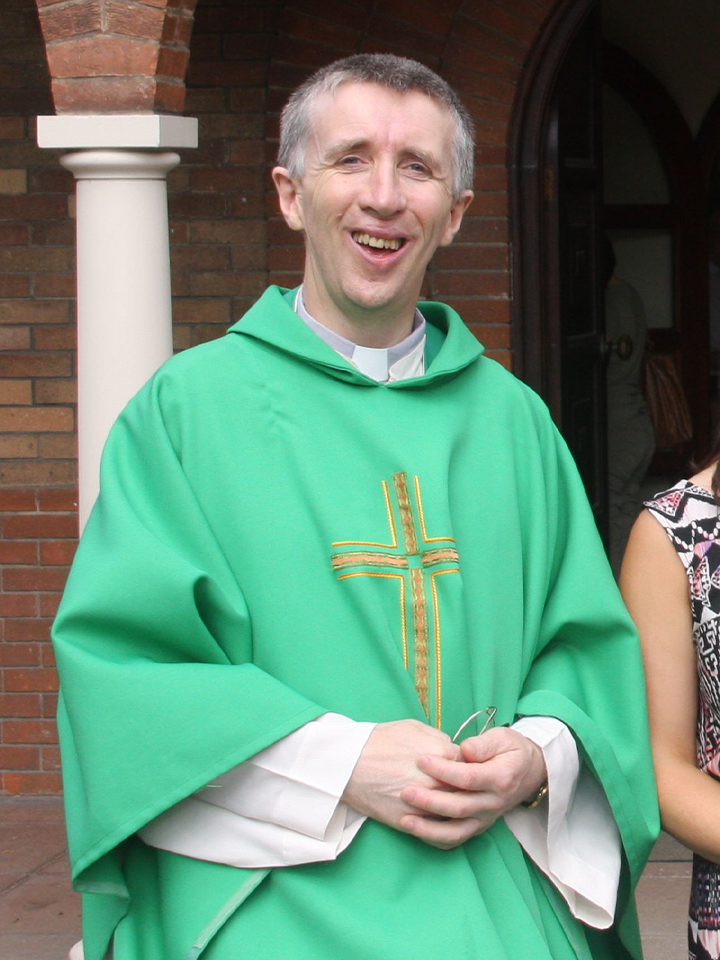 Fr. Patrick O’Beirne was born in County Roscommon in the west of Ireland. He grew up on a small farm, with three brothers and two sisters. He was ordained on the 19th of January, 1992 in his home parish -the Church of Our Lady of Perpetual Help in Aughrim, Co. Roscommon in the Elphin Diocese.

As a child, Patrick’s family was devoutly Catholic with daily family prayer of the rosary and regular Mass attendance. At the age of twelve he went to a diocesan boarding school where he studied for six years. Patrick was always very moved by the example and sacrifice of the priests who were teachers and lived at the school.

In the 1980’s there were a lot of priests serving in Ireland, so Patrick felt that there would be a greater need overseas. For a time in his teenage years, he eagerly read every missionary magazine he could find, including the Far East magazine produced by the Society of St. Columban. Whenever he was in boarding school he found the idea of joining the priesthood very attractive, however, when he returned home for weekend breaks, he felt repelled by the idea of giving up a family and a career. Despite this, the fantasy of priesthood grew slowly in his heart.

Patrick left secondary school unable to make up his mind about the priesthood because he had a fear of failure, a fear of the shame of being told that priesthood was not for him. Patrick decided to work for a year. Thoughts of priesthood kept recurring and he felt that he would have no peace of mind unless he enquired and ‘gave it a go’.

Patrick therefore wrote to five different missionary societies. They each sent back leaflets and information about their particular group and their specific way of being missionary. Having read them all Patrick put them on his bookshelf and carried on working, until one day, four months later and out of the blue, a Columban priest phoned Patrick and enquired if he was still thinking about being a priest. Sheepishly Patrick said that he was still interested and was invited to visit Dalgan Park, the headquarters of the Columbans in Ireland, to explore things a little further. Having paid a visit to Dalgan Park, Patrick was very impressed with what he saw and decided to take the plunge. Telling his parents was the final ‘hurdle’ in that initial journey. But Patrick recalls they were fine about it and supportive of his decision.

Before ordination, while he was still studying theology, Patrick was sent overseas for period of two years. The purpose of this period on mission during training for the priesthood is to allow students to learn the language and discover the riches of another culture and to get a deeper understanding of the calling to missionary priesthood, whilst not having to bear the burden of heavy responsibilities of the mission. Patrick was sent to Taiwan from 1988 to 1990. Returning to Ireland in 1990, he completed his theology studies and after ordination, returned to Taiwan in 1992, for a period of three years. The first year was spent in language school and the next two years was spent as pastor of a city parish in Taoyuan, a satellite industrial city of Taipei. The Catholics there were a mixture of indigenous tribal people who migrated from the mountains in search of work. Some were native Taiwanese Chinese and some were Chinese ‘Mainlander’ families who migrated to Taiwan with General Chiang Kai-shek after the Communist victory in China in 1949. The parish ran a small day-care center for intellectually disabled children.

Patrick returned to Ireland in 1997 and until 1999, served in the Irish Refugee Council in a social worker role welcoming newly arrived refugees seeking asylum in Ireland. At this time the Irish economy was booming and was known as the Celtic Tiger. Until that time very few people sought asylum in Ireland and the Irish government had to play catch-up in bringing in a raft of legislation and services for this new reality.

In 2000 and following a language refresher course, Patrick returned to Taiwan and stepped in to the role of Director of Hope Worker’s Centre for one year while Fr Peter O’Neill took a sabbatical. Following this, Patrick moved to the lowland parish of Chunan. This was a parish made up mostly of Taiwanese speaking Chinese Catholics. Various Columbans had served there since 1981. In this parish there was also a day care center for children suffering with intellectual disabilities.

After two years in this parish, Patrick was asked to move to the mountain parish of Taian. Here, for six years he served the indigenous Taiwanese Catholics of the Atayal tribe. The parish was spread out over eight villages along the Daan River. The people were mostly fruit farmers, whose culture goes back at least five thousand years; long before the seventeenth century migrations of Han Chinese, whose descendants make up the majority of the population of Taiwan today. The Atayal are one of the more than twenty tribes that formed from migrations of Austronesian fishing communities of the islands of South East Asia. Over the last century their culture has been slowly assimilated into the dominant Taiwanese, Chinese culture, and they are losing their language and way of life as their children move to the lowland cities in search of work.

Patrick explains the main challenge he faced in his mission in Taiwan as a Catholic missionary was the slow decline of the Catholic population. Before 1949 the number of Catholics in Taiwan was about 50,000. They were Christianized by Spanish Dominican missionaries who moved up from the Philippines. After 1949, the Catholic Church in Taiwan became predominantly a refugee Church. Hundreds of missionaries sought refuge there after the Communist takeover of China. They brought huge financial resources and set about ministering to the Catholics and welcoming many of the refugee soldiers who moved to Taiwan along with Chiang Kai Sheck. Within twenty years, the Catholic population increased to 300,000 people. When the Taiwanese economy began to take off on the seventies, many of these new Catholics drifted away from the Church. Today there are about 50,000 devout Catholics in Taiwan practicing their faith. The fact that the church received so much foreign aid at this time meant that it took a long time for local Catholics to learn that they had to take responsibility for the financial upkeep of their church.

The Society of St. Columban have served in Taiwan as a Mission Unit since 1979. As in most countries we have served in, we worked hard to build up the local Church at the direction of the local bishop of the Diocese of Hsinchu by serving as pastors of parishes.

As in other Columban regions we have sought to expand our understanding of mission work by seeking opportunities to witness to the Kingdom of God among people on the margins of society. For Patrick, three main areas of contribution stand out.

Columbans established workers centres. This began with Fr. Neil Magill who set up a worker’s centre for Taiwanese workers, many of whom were migrants from rural cities into the rapidly growing industrial satellite cities of Taipei. In the seventies, workers had very limited legal protection and were often exploited by local factory owners for profit. In the eighties, migrant labourers began to move to Taiwan in large numbers from overseas and this group had even less protection than the local workers.  Patrick believes that Columban advocacy work in this area has helped to enshrine workers’ rights into law.

Columbans also advocated for better treatment of disabled people and helped the wider society to see these people as human beings and worthy of being treated with dignity with full and equal access to the resources of the society.

Columbans also made an outreach to the indigenous people of Taiwan who suffer a similar fate of many tribal societies around the world – this being the slow breakdown of their culture. In living among them and being with them, Columbans have helped them to affirm their own sense of self-worth as individuals and as a culture.

In January 2010 Patrick moved to the British region and from the London house, served on the Columban Mission Awareness and Appeals team. In February 2014, Patrick took a sabbatical and enrolled in a year-long course, training to become a spiritual director in Melbourne, Australia.

In 2015, he was assigned to the China Mission Unit. He spent four years in Beijing serving as a Spiritual Director and English teacher to the seminarians at the Beijing National Seminary.

In November 2018, Patrick’s visa was cancelled, so he moved from Beijing to Hong Kong. It was at this point that he was asked to make preparations to go to Fiji to direct four Columban students in their Spiritual Year. This is a year spent apart from any academic work when Columban seminarians have an opportunity to pray, reflect and discern their calling to Columban missionary priesthood. To facilitate this process there also needs to be a physical separation. Patrick and the seminarians rented a retreat house at the edge of the rainforest where they could pray in the midst of nature, in an atmosphere of silence. This year concluded in June 2020. Of the four students, two of them discerned that God was calling them down different paths and two of them are continuing their theology studies in preparation for priesthood. It was a few months later before Patrick was able to fly out of Fiji back to London, due to the restrictions on international travel caused by Covid-19.

Having recently returned to Britain, Patrick is living in London and waiting for relaxation of the Covid-19 restrictions so that he begin sharing Columban mission with the people of Britain as part of the Columban Mission Awareness and Appeals team once again. 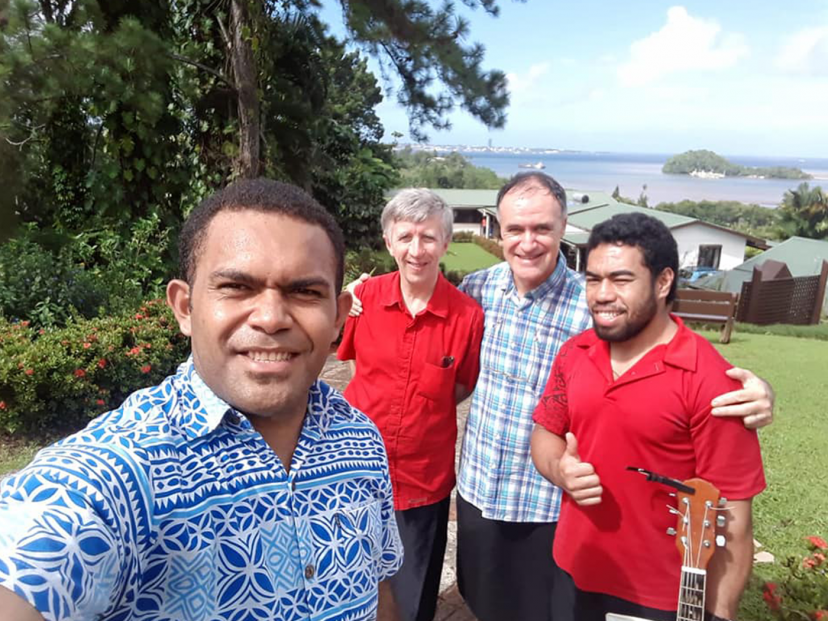