Christmas cards created by the indigenous Subanen community in the Philippines, long renowned for their crafting traditions, are now available to buy. By purchasing these cards you are supporting the Subanen people, who face eviction from their homes by logging and mining companies. Columban Fr. Vincent Busch, who has worked with the Subanen community for more than 20 years, explains how the card designs for this year were chosen. This article has been published in the November 2021 issue of the Far East magazine. 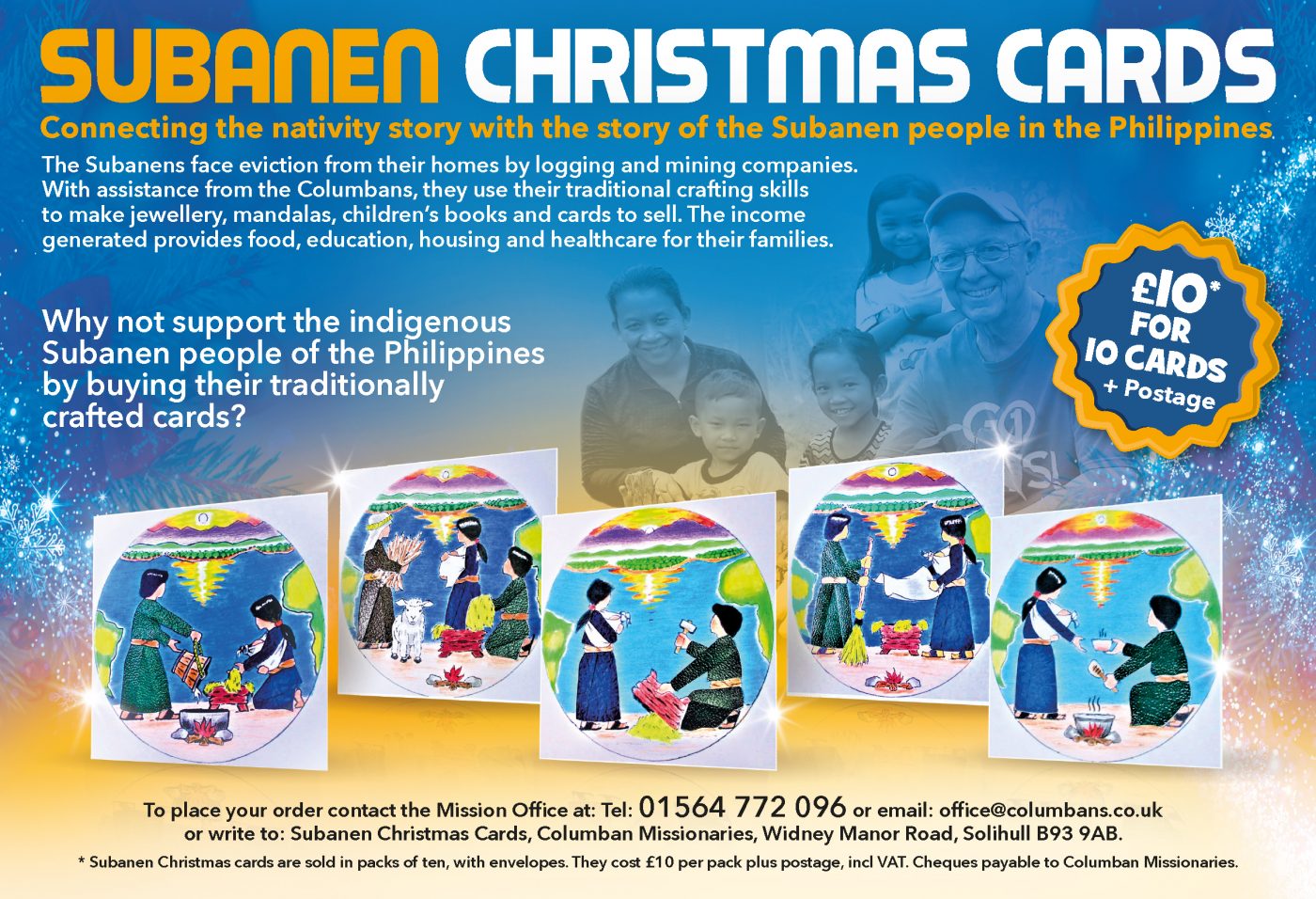 Read the full Far East magazine where this article was also published.

The Subanens are an indigenous people whose ancestral habitat is the highlands of Western Mindanao in the Philippines. Guided by the Columban Sisters who had been living and working with the Subanens since 1983, I began working with the Subanens in the year 2000. I came to see how their traditional way of life helped keep their habitat healthy, and how in turn, their habitat provided their daily food. I also came to see how the beauty of their habitat evoked in them an awareness of the spiritual dimension in the natural world. I also came to appreciate how they communicated with that dimension through music, ritual, and dance.

The Subanen way of life has a long crafting tradition. They developed, for example, clever ways to shape rattan, bamboo, grasses, and palm leaves into baskets, tools, furniture, mats, hats, musical instruments and even the walls and roofs of their homes. Attracted by their crafting tradition I worked with Subanens to form a project called Subanen Crafts. Each year, as part of that project, we create Christmas cards whose images celebrate ordinary, thoughtful ways that Joseph and Mary cared for each other. In this article I’ll share stories about how their cards celebrate Christmas, their habitat, and the ordinary but profound acts of caring people.

The process we used to design our cards began with listing ordinary, thoughtful ways that the Subanen people care for each other. From that list we then selected activities that Joseph and Mary might possibly do while living in a stable. My job was to create card-sized drawings of Mary and Joseph doing those activities. 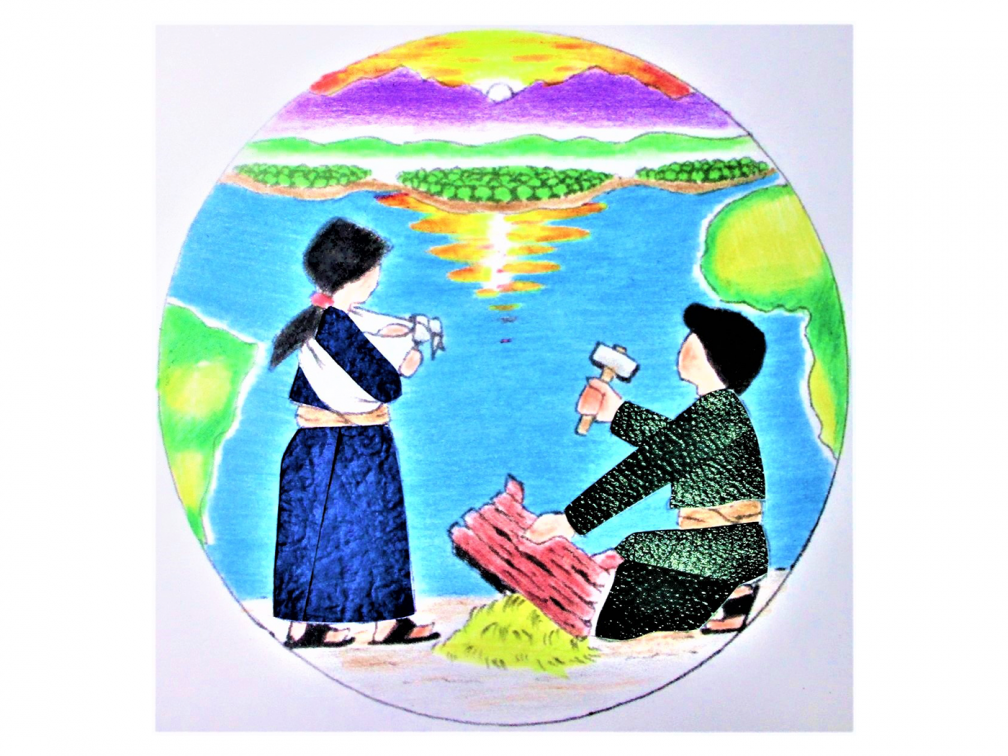 This drawing shows Mary holding Jesus securely in a Subanen-style sling while Joseph repairs the manger. Subanens constantly have to repair their tools, belongings and homes so it was natural that we would have Joseph using his carpentry skills to repair the manger.

Instead of a stable I drew Mary and Joseph within an image of our planet – the temporary shelter of all God’s creatures. Above Mary and Joseph I drew the mountainous homeland of the Subanens whose climate, forest, rivers and soil provide them with a safe and bountiful habitat. The Subanen people know that just as Joseph made the manger a safe place for Jesus, they need to make their habitat a safe and healthy place or their children also. 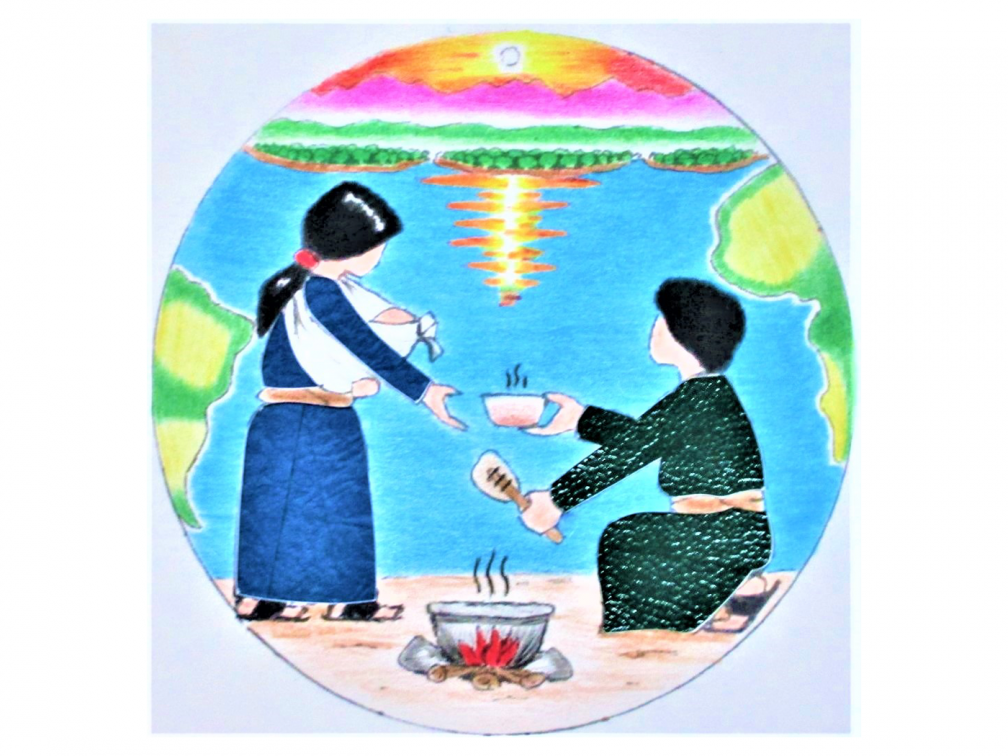 This next card shows Joseph giving Mary some food. Subanens make nutritious soups using leaves, vegetables and root crops from their small garden plots. To cook these ingredients they need water and firewood which are readily available if their forest and its streams are healthy.

This card calls to mind the words in the Lord’s Prayer, “Give us this day our daily bread”. The words in that prayer and in that phrase that make it a prayer for the common good are “Us and Our”.  How limited that prayer would sound if it said, “Give me my daily bread.”

In the Philippines economic polices that many thought would enhance the nation’s progress and development have turned out to be hostile to the common good. These policies allowed extractive industries to make quick profits at the long-term cost of polluting and degrading the nation’s seas, rivers, forests, air and farmland. For example, from 1950 to 1990 logging companies deforested huge areas of the Subanens’ homeland. These companies made huge profits which allowed their owners, share holders, and a few workers to acquire the food that they prayerfully asked God to give them, but in the process, caused permanent damage to the food-producing forest and the soil of the Subanens. This damage went beyond the Subanens’ homeland. Without forest cover monsoon rains quickly became torrents of muddy water that cascaded down the mountains clogging irrigation systems and smothering coastal reefs and fisheries. In the aftermath of this deforestation, many Subanens left their homeland to seek work in cities and towns as servants and menial laborers. In our small way the Subanen crafters are working with programmes run by the Columban Sisters which are restoring their God-given habitat so that its ecosystems might continually provide a better life for all into the future. 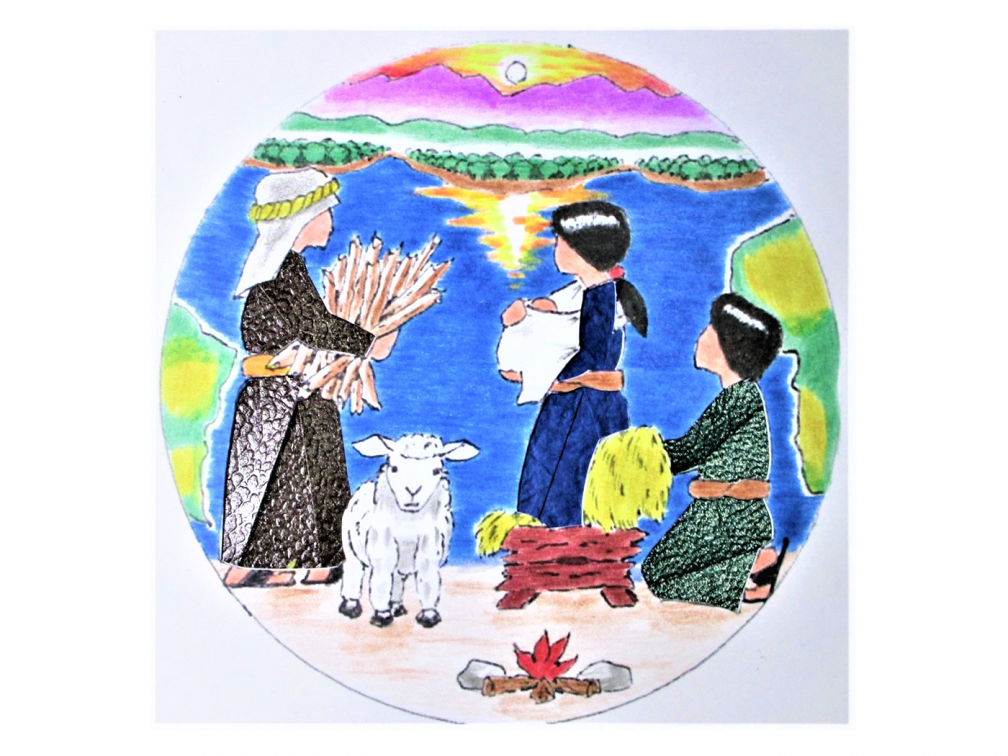 The next card shows a thoughtful shepherd bringing kindling wood to Mary and Joseph as fuel for their warming fire. This image has a meaningful background story. I once saw a Subanen man carrying a huge bundle of kindling wood down a steep mountain trail. I learned later that this man regularly hiked 10 kilometers (around 7 miles) to the town so he could sell his burden for a few coins, enough to buy a few handfuls of rice for his family. The Subanens belong to families who support each other through such ordinary but profound acts of love. This card honours one such act and in doing so, helps us see the deep love that the Christ child will experience with his parents. 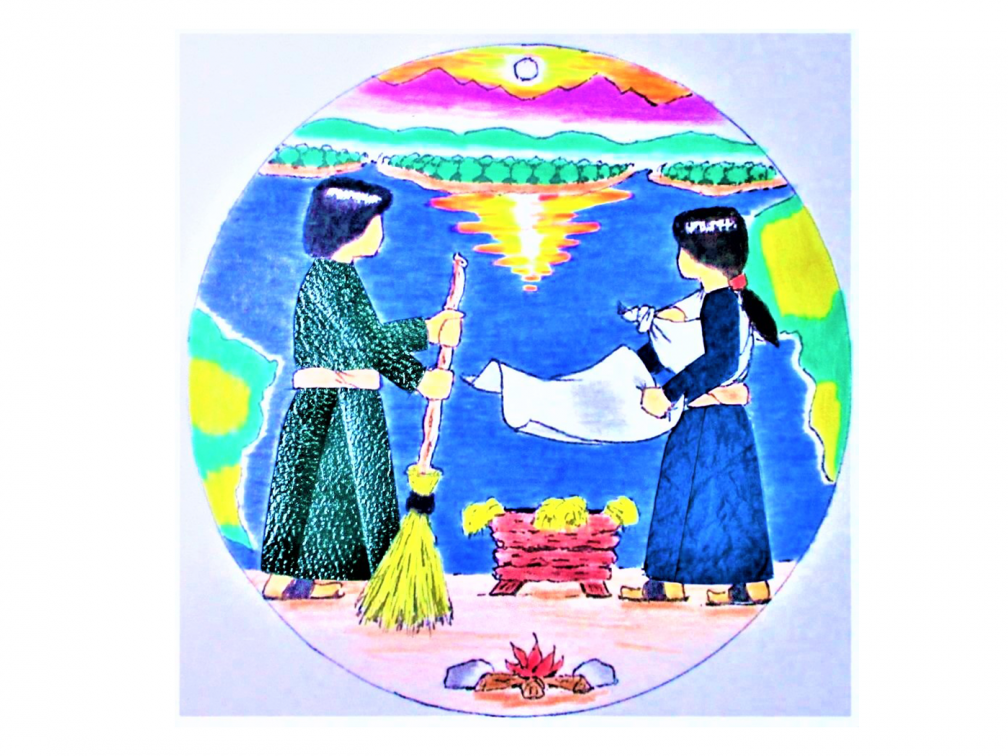 In this next card we show Joseph sweeping the stable while Mary spreads a blanket over the manger. It looks like Joseph has stopped his sweeping to look at Mary and Jesus. I can imagine him experiencing the bond that parents have with their children. Mary and Joseph will deeply feel the joys and sufferings of Jesus throughout their lives.

The bible points to this parent-child bond as an example of God’s enduring love for his people: “Can a woman forget the baby at her breast and have no compassion on the child of her womb? Though she may forget I will not forget you.” (Isaiah 49:15). Jesus expands the embrace of God’s love to include all creation: “Go into all the world and preach the gospel to the whole creation.” (Mark 16: 15). In our cards the globe represents the whole of creation that God so loves. 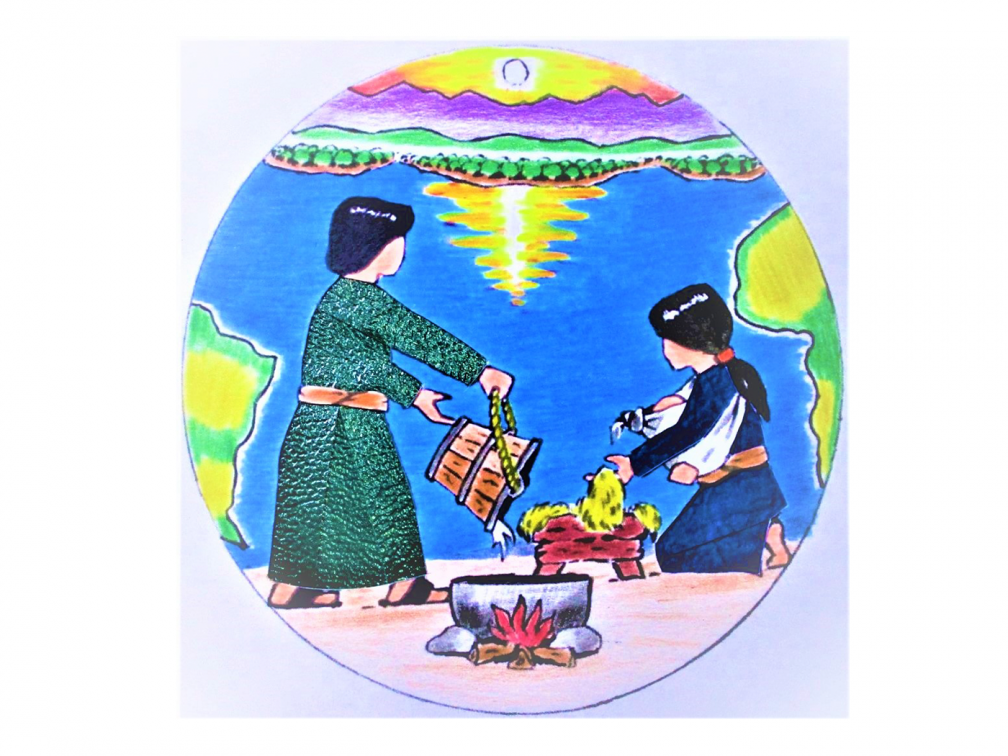 In this last card we show Joseph pouring water into a basin while Mary puts fresh straw in the manger. For the Subanens, fetching water often involves a steep downhill hike to a forest-fed stream. The Subanens can easily imagine Joseph needing to go some distance to get the water he is pouring.

As deserts spread throughout our over-heated planet, thousands of people, mostly women, have to walk ever greater distances to get water for their families. Jesus praises those who give drink to the thirsty (Matthew 25: 37-40) so it makes sense that he would praise people who, through their work and their way of life, enhance the ecosystems that provide that water.

As Joseph pours water, he watches Mary preparing a safe and comfortable resting place for Jesus. While I was drawing Mary, I thought to myself, “What if Mary saved that handful of straw she was placing in the manger and somehow it was passed down to this day as relic of the place where Jesus was born?”  Such a relic would be venerated in all our churches. No doubt, when Mary and Joseph fled Bethlehem to escape Herod’s soldiers the straw remained as animal feed and once eaten, would be recycled as dung to fertilize the soil, and there it would become, yet again, a nurturing resting place – this time as fertile soil for plants and trees.

In the vastness of the universe the Earth is but a tiny, fragile “stable” for all God’s creatures. God so loved the world that he sent his Son to be born in that stable. In a wee corner of that stable, I came to know many Subanens who are nurturing their life-giving habitat. Their Christmas cards celebrate the ordinary yet profound ways that they care for each other and for the world that God so loves.

Subanen Christmas cards are sold in packs of ten with envelopes. Each pack costs £10 plus postage and packing. Orders require 7-10 working days to be processed.

Let us pray for indigenous communities around the world.