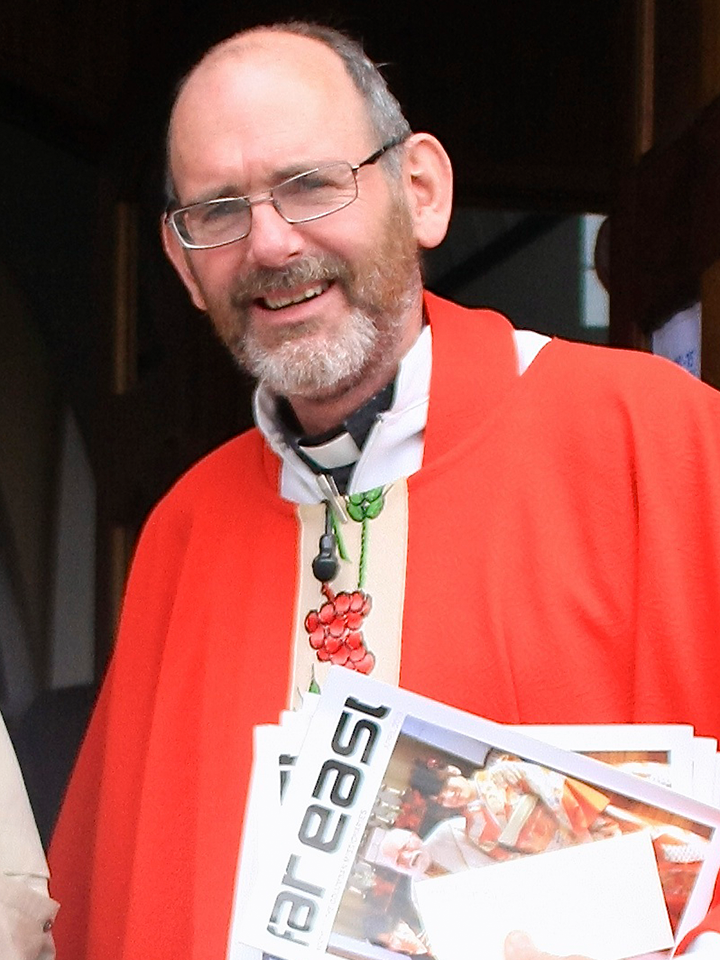 John Collins was born in Kilkee Co Clare on the west coast of Ireland. After finishing school, John attended the National Fishery School for 6 months beginning an apprenticeship. He worked on fishing boats for more than three years, working on a variety of different boats and travelling around the coast of Ireland. He was working long hours, doing hard manual work and questioned if there was more to life. Combined with his friendship with Christ which continued to grow, John began to consider a vocation. After two years John wrote to the Columbans and they invited him to attend a vocations weekend. Whilst participating in this weekend, he met a group of seminarians whom he admired and identified with. Similarly he felt at home with the priests he had met and liked the setting of the Columban house in Dalgan Park.

John first experienced mission between the years of 1985 -1987 when he attended overseas seminarian training on the Island of Midanaw in the Philippines. Together with Ray Husband and Padraic O Donovan , John studied language in Cebu and from there, went on to an assignment in Mindanaw. John’s main task was to immerse himself in the local community in order to experience their culture and learn the local language. John spent some time living in Christian and Muslim communities in Dinas in Zamboanga Del Sur. There he had exposure to the tension that existed and learnt more about the New People’s Army who were in an ongoing conflict with the Philippine military in many parts of Mindanaw. Besides living with these Christian and Muslim communities, John also spent time living with a single fisherman in his little hut on the sea shore outside Ozamis. John also recalls spending a short time with an urban group working on human rights issues in the City of Ozamis.

From 1990-1992, John worked in the Columban parish of St. Bedes in Widnes, an industrial town in Cheshire, Britain. John was ordained in 1992 at St. Columbans, Dalgan Park, Navan, Ireland and served his first Mass as priest in his home parish of Kilkee.

After his ordination, John went back to Mindanaw in the Philippines and attended language school in Davao with the Maryknoll Fathers. He was assigned to the parish of San Agustin in Surigao Del Sur. This was a parish consisting of three towns on the coast with a mountain hinterland that was forested. This was an area of conflict between the New People’s Army and the Philippine Military so his time spent ministering here was challenging.

One of the striking things John recalls about the church in Mindanaw was the commitment to lay formation. In Dinas, the parish centre was a hub of continuous activity. Various courses were run from here and overnight stays for large groups of people were common. Women’s groups, catechists and youth groups, as well as various tribal and justice and peace groups would often come to stay. There were many talks and courses given on topics that touched people’s lives and issues important to the community.

John assisted the parish priest and worked closely with the pastoral council, parish workers and catechists. He supported the delivery of the sacraments to the local communities.

In 2001 John moved to Boston, MA, USA and spent two years studying Clinical Pastoral Education. This was interfaith training designed to teach pastoral care spiritual care providers, hospice and hospital chaplains. The aim of the course was to integrate the theory and practice of spiritual care into managed encounters with patients and families in crisis. John qualified as a Hospital Chaplain in 2003 and in that time he was the Catholic Chaplain Holy Family Hospital for a year.

Upon returning to Britain in 2003, John worked as a Hospital Chaplain with the NHS Trust in Bradford for 4 years as part of a multi-religious team consisting of an Anglican minister in charge, a free church minister, a Muslim Iman chaplain, a female Muslim chaplain, a Sikh chaplain and a Hindu chaplain as well as 35 other volunteers.

John relocated from Bradford to the Columban residence in Solihull in 2006. Since then he has been an active member of the Mission Awareness and Appeals team and has travelled across the country engaged in Mission Awareness and Promotion . John enjoys this work as it gives him new purpose and meaning in facing the new challenges to mission in the light of the changes to our times. John’s prayer life and faith are important to him, his time spent before Christ, he believes, are the most fruitful of times and the source of all fruitfulness in his life and ministry.